Last November the Dubai Global Grad Show took place for the third time and once again, Aalto University was represented by some of our talented students. Amar Nath Shaw, Tuomas Burakoswki and Marina Baranova report.

What was the Global Grad Show 2017 about?

The Global Grad Show is an exhibition of graduate works from the world’s leading design and technology schools. It takes place during November as part of Dubai Design Week. Since its launch in 2015, the show has grown to become the world’s largest student gathering. The third edition (GGS 2017) took place from 13-18 Nov, 2017 and included works from 92 universities from 43 countries, brought together in a single space and presented to the public by the designers themselves. This is the second time Aalto University was invited for the exhibition. For this year, all the projects were divided under three main themes – Empower, Connect and Sustain.

Aalto University, (Dept. of Design) was represented by

Along with Simo Puintila (lecturer, Dept. of Design) as a faculty member and mentor for the event. 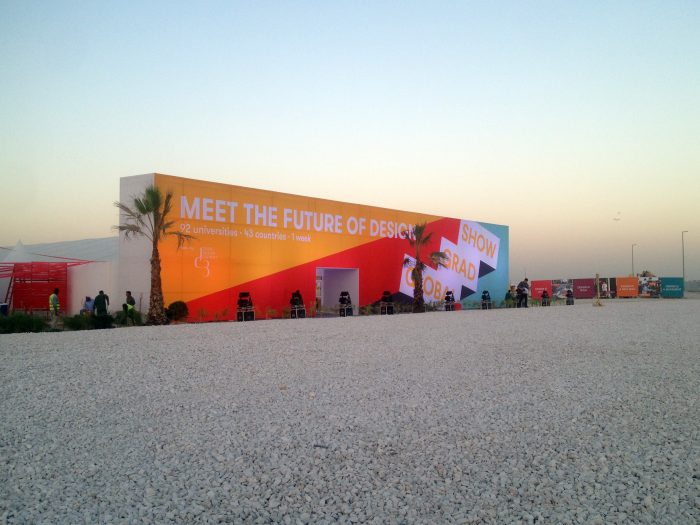 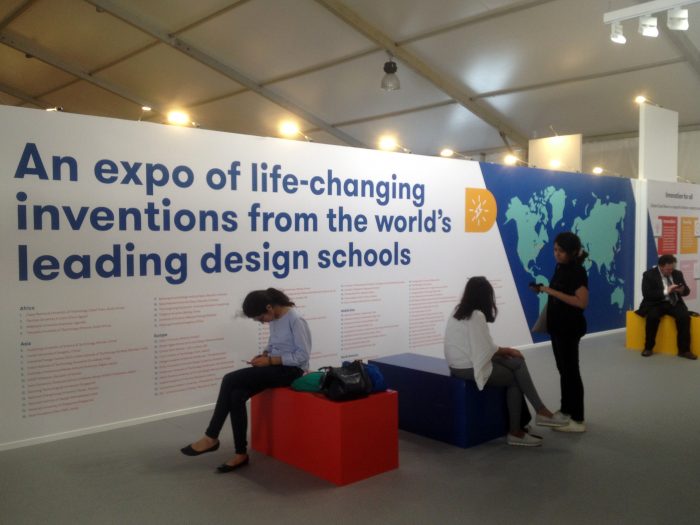 What is the application process?

After having received the invitation from GGS during the month of June/July, all the students were informed and asked to submit their projects in the form of pictures and additional text to Simo, matching with the given themes.

Around 15 projects were selected and sent to GGS out of which 4 projects were shortlisted to be exhibited. Though the exhibition name is Global Grad Show, it is important to know that the projects did not have to be graduation work, but any projects that have been done or started in school. Another aspect to have in mind, it was important to show projects that have some relevance or meaning and have a wider design impact for a more equitable, sustainable, and prosperous world. 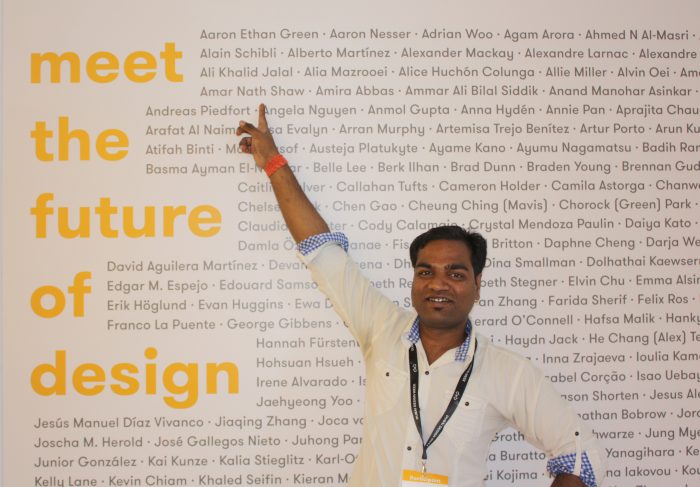 “The overall experience was simply great, considering this was my first visit to Dubai. Although I knew some information about the GGS from last year’s CoID students, but seeing the city and the massive scale (taller, bigger, larger, and wealthier) was a different know-how. The ongoing city construction of giant buildings and places seems never ending and it appears that – though the city has all the facilities one can imagine – the only missing aspect was “designing for people”, as one cannot walk freely in the new town and needs to depend on car/ transportation. There are big contrasts between the new and old town; the old town still has its charm and one can experience the local flavor of Dubai when walking through Gold Souk and Old Souk (the local Gold and Spice market).

Regarding my project, I got positive feedback from visitors and took the opportunity to collect feedback from fellow designers and local people. One person even agreed to sponsor the cost of making one prototype, to take the project forward.

On a personal level, the most interesting part was seeing around 200 projects from 92 universities in one place and talking to fellow exhibitors which contributed an awareness of different context, culture and aspects of design that are being done currently.

Also, since GGS was done as part of Dubai Design Week, I was a bit surprised to know that the design scene in Dubai (UAE) is still in its early stage and there are still efforts being made to showcase Dubai as a global hub for design.

Lastly, my bachelor school (NID) from India had also participated and it was great to meet some of my seniors and friends and professors living and working in Dubai, along with making new friends. 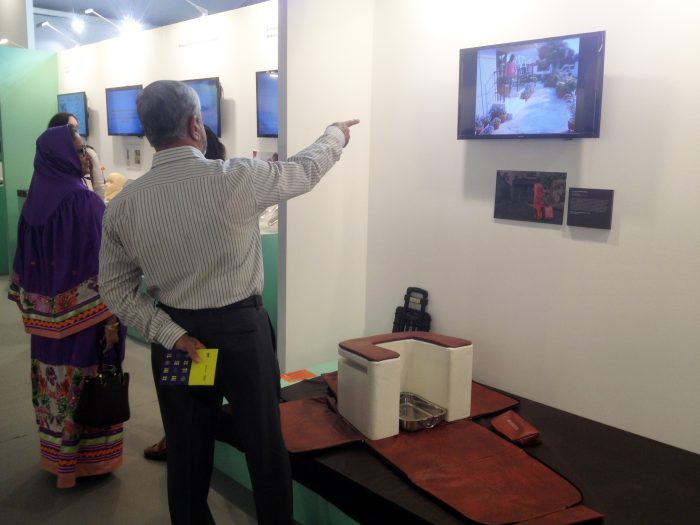 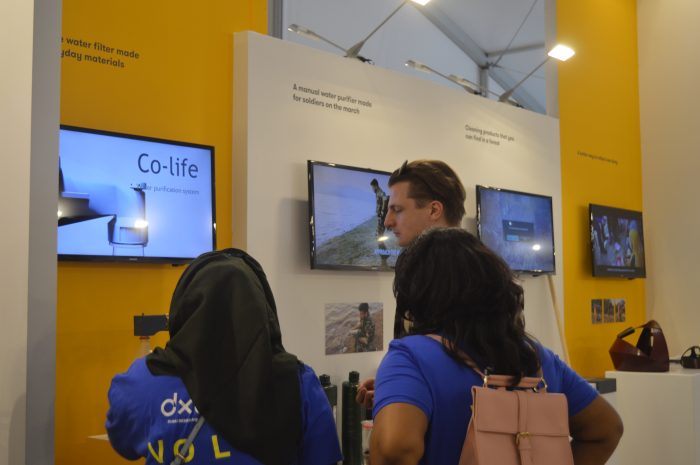 “Arriving to Dubai at 7 A.M. Sunday morning, our merry bunch was jet-lagged, and sleep deprived to the point of almost accepting the extra 200 Dirham, around 45 €, cost of booking into our hotel early, as our scheduled booking would only be at noon. In a great show of mental fortitude, we chose to remain in the lobby area that the polite hotel staff gracefully let us into. As I was the one with the hardest time sleeping on the plane, I chose not to sleep, but instead wandered off to scout this new, strange land. My body craving sustenance, I slipped into the warm Arabian night. Not much time had passed when I came into the conclusion that Dubai was indeed not a place for the walking type. Pedestrian crossings were hard to come by and would often display a mystifying logic that was hard to unravel. The white lines would start from a grassy patch in the middle of the road, but going only one way. Unless the poor pedestrian somehow managed to materialize on said patch of grass, crossing the roads would prove a challenge. After spotting the familiar colors of a well-known fast food joint, I back-tracked to the hotel to wake my travel-weary companions. We decided that Niko and I would try to find a way across the endless stream of expensive automobiles, and bring back whatever gifts the desert would provide.

After some failed attempts of navigating the chrome and steel flood that inhabits the Emirates at night, my sharp-eyed co-conspirator spotted what seemed to be a metro station in the distance. We circled the building, marveling at the architecture that seemed to defy all late-modernist logic. A full circle around the glass and steel behemoth was needed before we could solve the enigma of entering this hub of modern urban mobility. We marveled at the strange writing of this faraway land as the horizontal escalators zoomed us to the other side of Sheikh-Zayed Road, one of the main arteries of modern Dubai.

The local seven-eleven provided us with all we needed to survive until the morning bus would take us to Dubai Design District, colloquially known as D-three, where we would set up our attractions. Our weariness was swept away by the excitement of actually getting to work as we crossed a large parking lot under the scorching sun in search for our tent and the much-awaited Global Grad Show.

As our project, The Co-life water filtration system, is intended to be mobile in its final form, my setup was quickly executed. Only the remote control for the TV that would display the video was missing. After locating the gadget, I concluded that even on full volume the audio was barely audible under the infernal racket of the ginormous air-conditioning machines.

After all of our team had set up their stalls, we went to lunch and then some much needed sleep. Nothing of importance transpired until next morning. 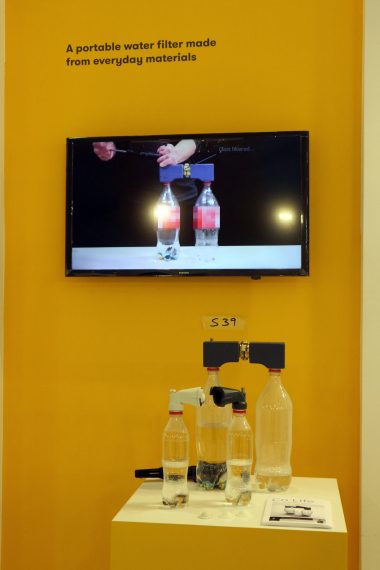 Monday was reserved for press, jury and VIP visits, of which sadly only a few ever wandered to the Sustainability section where three of the four Aalto projects resided. For some inexplicable reason, the venue had only one public entrance, and a serpentine form ending in a small loop at the very end. Nevertheless, we had fun getting to know the people around us and their projects. Professor Puintila paid a visit, using frantic sign language to urge me into a conversation with a member of the Jury, a tip for which I am grateful.

Most of the week was spent between GGS, the design district, sight-seeing, and the pool. Pool-time established itself as a welcome ritual after we found out that even though our hotel itself did not have a pool, we could get a voucher with which to gain access to a health club in the next hotel over, a few hundred meters away. The premises also held a Finnish sauna with a Harvia stove, a Turkish sauna, and a bar.

We only visited the beach once, on Friday. My collaborator in the Co-life project, Tuomas Jussila, flew in from Milan to attend GGS briefly. I believe he described his two-day stay as an “Absurd, but great” experience. The beaches in Dubai are probably the only places aside from the desert where one can walk around freely without the fear of getting overrun by an out-of-control, feral Lexus. The beach which we attended was called Kite Beach, and had white sands and great food. A bus from our hotel went to the beach and back via Dubai Mall every three hours or so.

After we failed to catch the prize or any honorable mentions from the jury, we packed our stuff and headed out. Our last night In Dubai was spent watching the city lights from a bar patio on the 43th floor near Dubai World Trade Center metro station.” 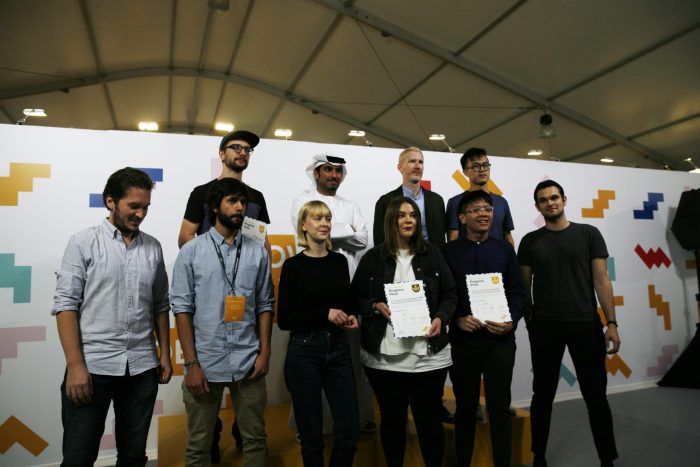 “Now when I think of it, it’s hard to say which part of our Dubai trip was more interesting for me. The Global Grad Show itself was a really nice platform to meet fellow designers, expose your own work and check out some projects you had seen online before.

But at the same time, it was totally worth it to explore the city and the Middle Eastern culture. Even the rest of the Design District looked rather different from what one would expect a design exhibition to be. Lots of gold and luxury around made our venue obviously distinctive. The city left an impression of a blend of notable contrasts with its totally empty sidewalks, yet quite heavy traffic, or the Old Town with noisy markets and crowded streets contrary to half-empty shiny skyscrapers. All in all, it was a really hustling week and a great experience.” 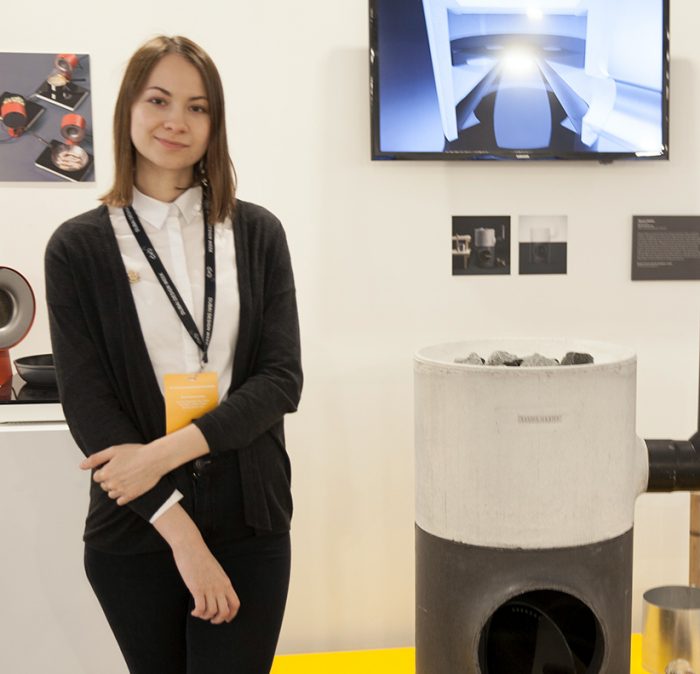 Some practical information and suggestions

Overall, the Dubai Global Grad Show is a nice platform to showcase your projects and get some attention from media, along with the opportunity to see so many nice student projects in one place. If you can, go for it next year!